One must practice one’s craft. Self portraits may be the best way to learn how to photograph people. It’s also a great way to let off steam when subjects are scarce.

Models can be canvases.

Models, I realized, aside from being photogenic people who can project attitude and emotion and throw shapes, are canvases. For this concept I needed a human form and skin for an experiment with “tattoos”. Tattoos were too hard to design on my own so I got a “tribal” design from Adobe’s stock photos.

I don’t like pictures of myself for the most part. I’m not entirely unathletic but I am overweight. Stout. Just turned 44 yesterday, which is to say I don’t have the  burnished complexion of a twenty-something. It took a lot of shots to come up with something that’s not embarrassing and there’s a reason why these photos are from the chest up. The Dad Bod trend didn’t last long enough. Can’t wait ’til I’m buff again.

I did a lot of skin smoothing and editing — a lot — in Lightroom and Photoshop. (The tattoo is photoshopped, although I’d like to do some artful body painting or henna someday.)

A good photographer will capture you at your best if you can relax a little bit just long enough to let out the real you. Just for a moment, however brief. Other than that, it’s all about light and shadow, form and space.

I can’t decide which ones I like better: color or black and white.

Gotta practice on someone and I’m always available at the drop of a hat. I spend a LOT of my down time watching YouTube videos: photography, studio lighting, reviews, tips and tricks (plus camping, bushcraft skills, mountain biking, snowboarding, skateboarding, making beats).

I like these photos for technical reasons. I wore that hoodie sweater the other day and when I pulled the hood up in the cold I saw the hooded under-lit image in my mind. The mood that was in my head is in the photos.

That’s a win, especially considering my set up. In my cluttered living room with a black, wrinkly backdrop draped over the bedroom door.

I ordered an Alien Bee lighting kit on eBay. It would have been so sweet. I had plans, man. The seller had many complications of business and personal natures and ultimately a week or so later – I was starting to think I was getting scammed but that wasn’t the case — let me know that it wasn’t available. I was crestfallen and stressed about the money but It was refunded. The seller had a Murphy’s law kind of week.

A good set of studio strobes would be phenomenal but the truth is I’m not taking enough photos to justify the cost. I took these photos with my Sony speedlights (one firing down through a 24” Octobox and one firing up from the floor with a Magmod grid), fired remotely via Phottix wireless triggers, plus a Last-O-Lite reflector.

That qualifies as a professional setup but lacks the power and action-freezing capabilities of much more powerful and versatile strobes. I want to be able to take that power on the road but it comes with a cost, of course.

I’m having a hell of a time finding anyone to photograph, though. I’m thoroughly frustrated. Craigslist has turned into a complete cesspool. I got really lucky with Audrey the first time I tried that. Model Mayhem … maybe I just need to learn my way around. I guess networking would be more effective.

Ideally, I’d like to have a working relationship. So when I get an idea I can ping someone: “Hey, I have an idea I want to try. You free tomorrow?”

This is an age-old issue with the arts, of course. When you want to do your own thing – chase after your ideas – this is how it goes.

But when you get in the groove … it is so worth it.

Inside: Regular people; The Hunger; A pro photoshoot; Craigslist is creepy as ****

To quote a sage:

Let me put that in the context of photography:

Everybody wants great, memorable, high quality photos of themselves and their loved ones. Nobody wants to get their picture taken.

END_OF_DOCUMENT_TOKEN_TO_BE_REPLACED

Sometimes you’re walking along a trail with your head in the clouds. You forget about the snakes in the trees.

Don't forget to look up. Anybody know what kind of #snake this is? #HuntleyMeadows

I need some help from any art connoisseurs or historians.

Then I forgot it by the time I left the museum. I couldn’t sleep last night and something flipped a switch and I decided I was going to figure this out. That’s what I’ve been doing this morning with a documentary about honey badgers on TV in the background.

After lots of googling, I still don’t think I’ve got it — and I don’t really care if I find the actual artist’s works in question — but I’ve found what I needed to find.

“Gallery of the Louvre” by Morse

And that is guy-who-gave-us-the-telegraph Samuel Morse, in case you were wondering. Actually, the first article I read was an art historian critique. Critics rub me the wrong way but hey. Whatever.

Looking through the image search results I saw something similar to what I saw all those years ago. That eventually led to this.

That’s more like it. And that led to a Dutch wikipedia page and the term “kunstkamer”. I don’t know what that means. Art room, I think.

I think it was Pannini. Holy crap. It’s like a little part of my brain has been holding its breath for twelve years and can finally breathe in. 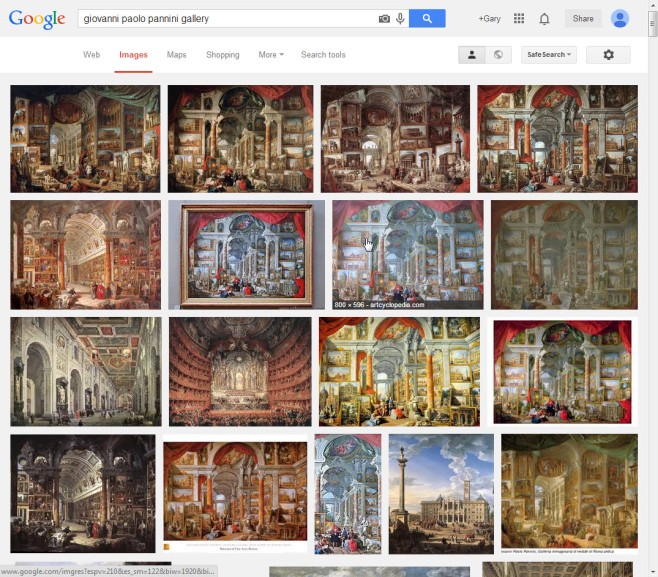 Finally. Now. Where can I see these in real life?

Let’s talk about this. Oh, there are no nude pics in this entry. Sorry. Well, I do have one album here just so you don’t feel like you’ve been bait ‘n switched: